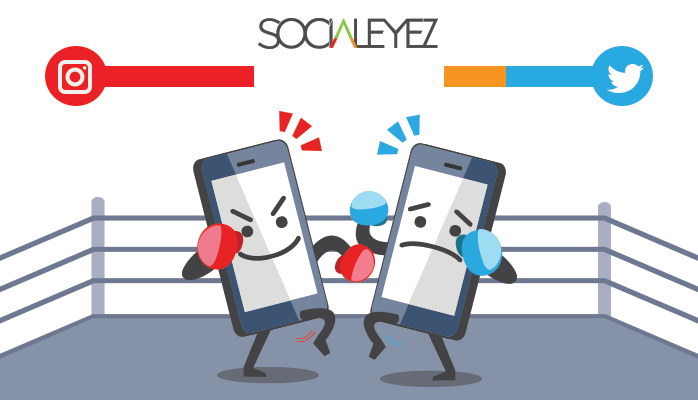 According to the latest Statista report, by June 2016 there were more than 500 million active monthly users on Instagram. That’s a pretty mind-boggling figure, especially when you consider its inception only happened in 2010. Instagram’s impact on the digital world has been meteoric. Why is that? Instagram’s founder, Kevin Systrom, attributes its success to luck, but Instagram users think quite differently. With 95 million photos and videos being shared every 24 hours and 40 billion photos in total it’s almost incomprehensible.

But if you step back a moment it’s obvious with the rise of smart phones and the mobile revolution our lives are visual. That’s why I think Twitter is now struggling to be the ‘go-to’ social media platform. They seem to be stuck in the past. Gen Y is opting for the filtered fabulousness of Instagram rather than an instant, news-driven platform that seems to be so, well, 2014.

Twitter has struck back with their Twitter Moments Cards but somehow the soft-focus, filtered world of Instagram is far more aspirational and appeals to contemporary aesthetics. If users have shared four times more photos than there are people on the planet, then Instagram has obviously tapped into a movement and Twitter can only watch with envy. According to Statista, Twitter’s users will represent fewer than 6 per cent of social media users by 2019. These are sobering stats indeed.

Twitter’s algorithm could have kind of saved the day

Naturally, Twitter has attempted to rectify this downward pattern and may have cracked it with their revamped algorithm. You can now add links and images without impinging on your 140-character allocation, which has been very well received by users.

There are 310 million active monthly users who send about 500 million tweets a day. The vast majority of these tweets contain a link to another piece of content.

Instagram, on the other hand, restricts users to just one URL per profile, which they can direct their followers to in each post. There is no linkable call-to-action. Therefore, as a driver of traffic Instagram pales in comparison to Twitter. However, this is part of the ‘Instagram package’, in that users are not bombarded by links or people shouting at them to go somewhere else. Instead, users are encouraged to stay on the platform. This is probably why Instagram has a more engaged community; people stick around for longer.

Which one is best?

You might say that Instagram is where you should invest, over Twitter but their raison d’etre is quite different. After all, Twitter appears to be for everyone, from people who want to update friends to celebrity followers and news junkies. Interestingly, journalists compose 24.6 per cent of verified accounts. This might suggest that it’s a platform for people who have or would like to hear current ‘of the minute’ new stories to tell. By contrast, Instagram is a little more egocentric, and revolves around personal stories.

How might all this affect my marketing, and which platform is right for my target audience?

I think it probably depends on what you’re selling. People want images and will search for them. Images are far more instantly gratifying and this is the edge Instagram maintains over Twitter. Twitter is about finding information as quickly as possible. If you want to know what’s happening right now, Twitter is the place.

As a marketer, you are far more likely to court engagement on Instagram because images carry more emotional appeal than text. However if your tweet is timely and ‘hyper-relevant’, its potential to go viral is immense. So, if you are launching a product or disseminating breaking or exciting news, I think Twitter works best. You do, however, need to be prepared to accept reach and impressions as your measure of success on Twitter, as opposed to actual engagement.

But there are more significant lessons to be drawn from this ‘battle’. It’s obvious that people are drawn to a more visual and personal form of marketing. Instagram shows they want to interact with brands and be allowed under the skin of their favourites. Consumers are curious and want to buy in to the whole psyche of what makes brands tick. They want to be able to believe consistently in the brand mission statement and be reminded that their choices really are the right ones.

Marketers shouldn’t forget consumers have aspirations and needs and want brands to understand them and put the customer first. Social platforms such as Instagram are intensely personal spaces and we only tend to be intimate with those that resonate emotionally with us.

#SocialSpeak: Weekly Round-up of The Biggest Developments in Social Media

Picking up from where we left off last week, we’ll be shining a spotlight on...

Results of a recent international study have delivered some shocking results, and highlights the cracks...

This edition of #SocialSpeak assesses how consumer behaviour has changed, thanks to social media and...