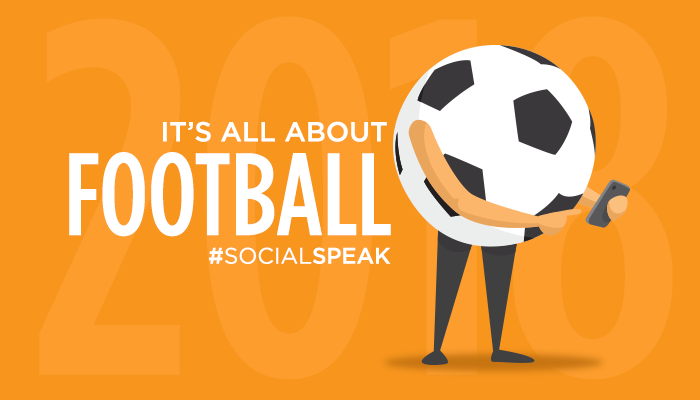 #SocialSpeak – 2018’s All About Football and Goals, Literally

As we look forward to 2018, review the year gone by and work on new strategies for the upcoming year, one topic above all is set to rule the world of social media in 2018, and that is nothing less than the beautiful game and the world’s most popular sport, football.

While some may be insta-famous, ‘The World’s Game’ has left an unmatchable footprint in the world of social media and will just continue to rise with the forthcoming FIFA World Cup 2018 in Russia. Especially since 4 regional teams will be participating in the World Cup after ages. According to a report by Forbes, European football teams held 11 out of the top 20 spots in the world for combined social media followings, interactions, and earned media value.

Let’s look at how Football has taken over our most used social media platforms.

Football fans are a critical audience for YouTube in 2018

2018 is a World Cup year and football fans are some of the most passionate communities in the world. There are over 3.5 billion fans globally and for the World Cup, casual fans act like a dedicated core that led to an audience of over 5 billion in 2014! Big matches live for 7 days on YouTube through recaps, highlights and analysis.

Facebook will use facial recognition to spot you in a crowd

Using the same facial recognition techniques Facebook uses to suggest friends you may want to tag in photos, the social network will notify you if someone posts your image without consent. The feature, called “Photo Review” will send you an alert every time someone posts a photo of you. So, the next time you’re watching a football match live and you’re in the crowd, you will have the option to tag yourself automatically in the photo.

Ask anyone which footballer the search for the most on Google and most answers would be Cristiano Ronaldo, Lionel Messi or regionally Mo Salah, in the blink of an eye! It turns out, though, that Liverpool’s Brazilian maestro, Philippe Coutinho was the football player people looked for more than any other on Google in 2017. This has primarily been due to his prolonged transfer saga over the summer.

On any given weekend, look at the Twitter trends suggested for you and it would be a grave surprise if 2-3 spots in the top 10 aren’t related to football. While the Premier League as a whole and teams like Barcelona and Real Madrid rule twitter regionally, fans have established a direct and passionate community on the platform to engage directly with clubs and superstar players. #DidYouKow that superstar Cristiano Ronaldo is one of the top 10 most followed people on Twitter with a staggering 66,471,772 followers?

For the latest developments in the world of social media and the forthcoming updates for the next year, be sure to check out #SocialSpeak every week!

There’s been some big developments in the social sphere over the past week, let’s delve...

Updates are never ending in the social media world. Snapchat never gives up on staying...

We all look for that “Clear History” tab to ensure our privacy while browsing on...