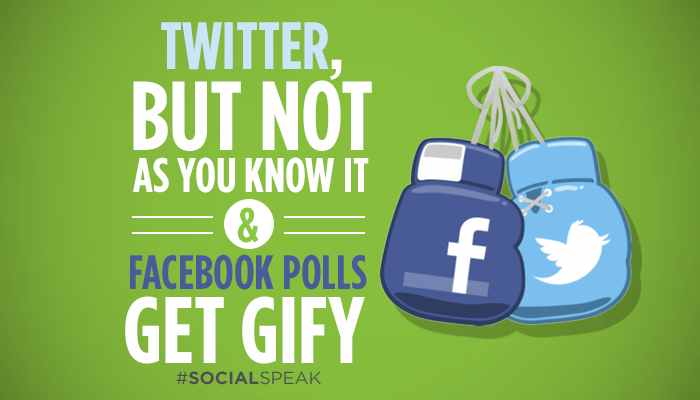 There’s been some big developments in the social sphere over the past week, let’s delve in together.

The biggest trend was Twitter’s announcement that they’ve officially rolled out the expansion of their character limit to users globally. People can now tweet up to 280 characters compared to the previous limit of 140 that has been a staple of the platform since its inception.

Refreshing an old feature and hammering on the success of Instagram Stories polls, Facebook debuted a poll feature supported by fun GIFs that appear in the main news feed. The new feature is supported on iOS, Andriod and the web.

Try this new feature out today with a poll about Twitter’s character extension on the SOCIALEYEZ Facebook page!

Arabic users rejoice! Instagram now supports the Arabic language natively, making the app more accessible to a broader global audience. You can instantly change the language of the app by going into the settings on your app.

Instagram’s been on a roll! A new change for Instagram Stories is out. It enables users to upload any photo or video content from their camera roll for their Story, even if that content is older than the previous 24-hour limit.

For the latest developments in the world of social media, be sure to check #SocialSpeak every week!

Psst…Have you noticed, in celebration of Twitter’s biggest change since their inception, we’ve wrapped up every element of the blog in 280 characters. 😉

Insta gets real and shopified while YouTube joins the Stories party!

#SocialSpeak is back with its 8th instalment, read on to learn about the newest powerhouse...

#SocialSpeak: Instagram Shakes it up for a Friendlier, Healthier User Experience

Instagram has released several updates to the application as part of their initiative to have...