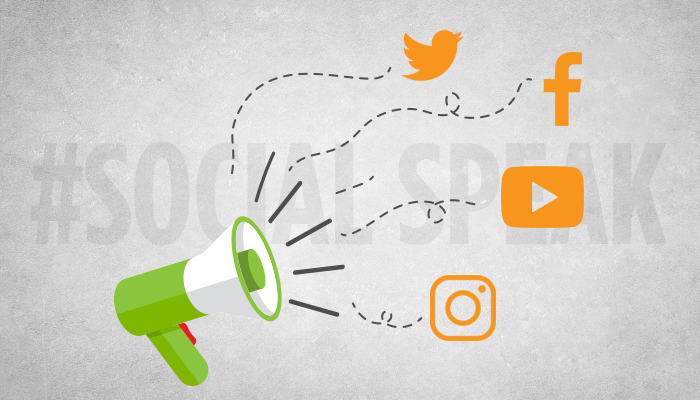 What’s the biggest and most widely used language on Earth today?

At different stages of human history, the world adopted different lingua francas. During the time of the Roman E­mpire, it was Latin. During the Islamic Golden Age, Arabic took the throne. By the turn of the 21st century, the global language had become English. But increasingly, the world’s most common language – the largest-ever medium in human history for disseminating messages, altering perceptions, establishing identities, and even changing the world – is the language of social media.

And we at SOCIALEYEZ are as fluent as they come.

To that end, SOCIALEYEZ is rolling out its blog: SocialSpeak, a weekly round-up of the most important developments, the newest challenges (and how to tackle them), and educated speculation on the next big thing(s) in the effervescent world of social media.

This week we’re rounding up the latest developments currently dominating the arena.

Remember when it took exactly two years to buffer a single YouTube video?

Well, the now-Google-owned video streaming giant has come a long way since the dial-up days (now raking in a cool $9 billion a year from video ads alone). It has just introduced a new Ultra-Low Latency feature for its live streaming function, as announced on its blog.

Latency is the buffer-period between host and user while live streaming, and it can reach up to 10 seconds. The higher the latency, the longer the delay in interaction between the person live-streaming and their viewers. With the “ultra-low” latency feature, however, this buffer-period is cut down dramatically, allowing for faster interaction between the streamer and the user-comments they receive.

Facebook’s Stories feature hasn’t enjoyed the wide appeal that Instagram Stories received since their launch. And since Facebook Inc. bought Instagram back in 2012, it only makes sense that the two platforms promote cross-publishing between them.

And as Mashable has recently pointed out, Facebook is doing just that. It’s testing a new feature that lets users post their ‘Story’ directly to Facebook – from Instagram. Zuckerberg’s social media giant “really wants people to view Stories on its main app,” Mashable’s Karissa Bell reported.

You can now enable night mode on https://t.co/fuPJa3nVky! 🌙 Also available on Twitter for iOS and Android. https://t.co/9AjOwcv3Zn

Twitter’s night-mode feature, previously only available for iOS and Android, has been introduced to Twitter.com. We have no doubt that this comes as great news to many of the birdsong-namesake’s nocturnal users.

For the latest developments in social, be sure to check #SocialSpeak every week!

#SocialSpeak: What you should be looking out for on Social Media

LinkedIn for influencers? LinkedIn started as a platform for professionals and businesses to mix and...

A chapter in social media we’ve all gotten familiar with are Stories; you select your...

Social Media platforms are always searching for new ways to let you connect with your...

Simmering down from the sizzling summer means that fall’s around the corner. And what better...